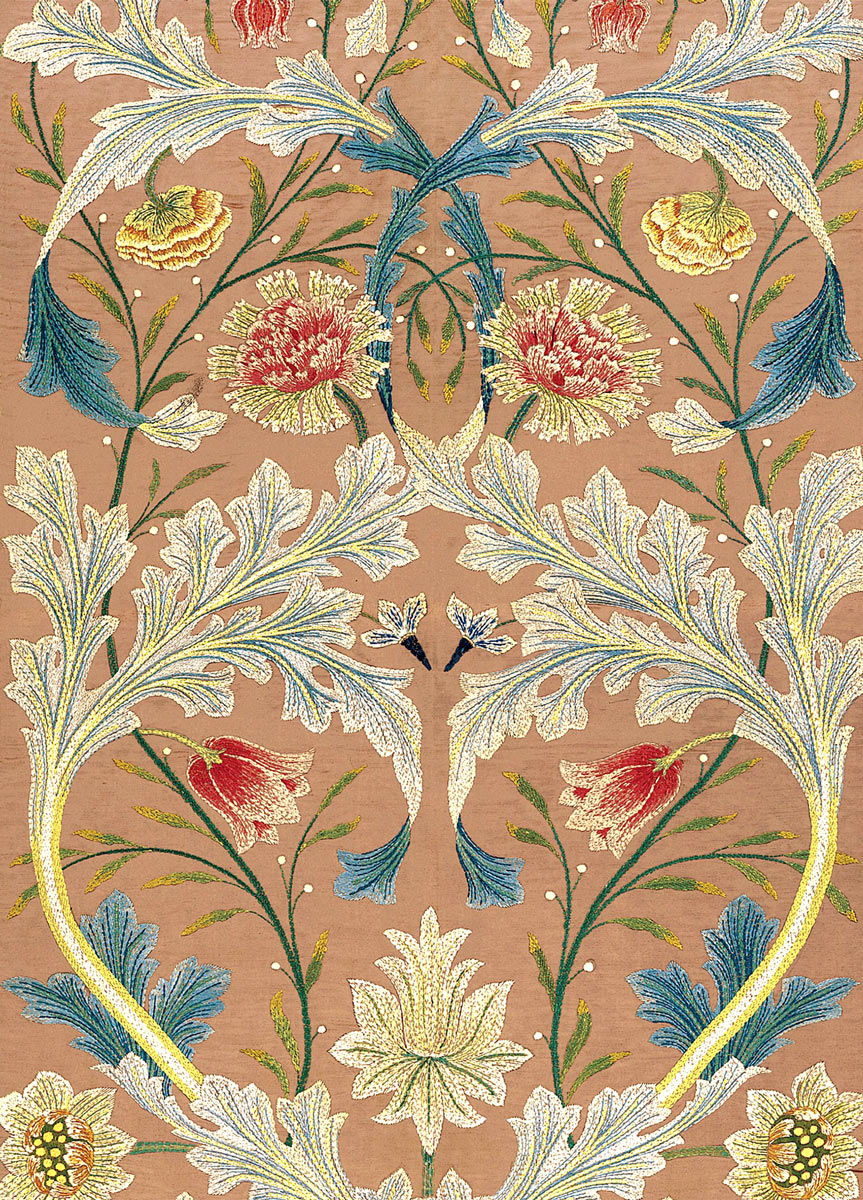 William Morris (1834-1896)
silk on silk, with linen backing, probably made by Catherine Holiday
image courtesy of the Metropolitan Museum of Art, New York

It is likely that much of Morris's preference for medieval textiles was formed during his brief apprenticeship with G.E.Street. Street had co-written a book on Ecclesiastical Embroidery in 1848, and was a staunch advocate of abandoning faddish woolen work on canvas in favour of more expressive embroidery techniques based on Opus Anglicanum, a surface embroidery technique popular in medieval England.

Morris taught himself embroidery, working with wool on a frame custom-built from an old example. Once he had mastered the technique he trained his wife Jane, her sister Bessie Burden and others to execute designs to his specifications. When "embroideries of all kinds" were offered through Morris, Marshall, Faulkner & Co. catalogues, church embroidery became and remained an important line of business for its successor companies into the twentieth century. By the 1870s, the firm was offering both embroidery patterns and finished works. Following in Street's footsteps, Morris became active in the growing movement to return originality and mastery of technique to embroidery, and was one of the first designers associated with the Royal School of Art Needlework with its aim to "restore Ornamental Needlework for secular purposes to the high place it once held among decorative arts.

Morris also employed the services of a freelance embroiderer, Catherine Holiday, which enabled him to diversify and produce embroideries at the top range of the market. Luxury items would inevitably uphold the company's reputation, whilst simultaneously stimulating the sales of kits for those that could not afford such expenditure. Morris saw Catherine's embroidery whilst at lunch with her and her husband, Henry Holiday, the painter. Morris asked Catherine to execute some large designs for him, and saying that the colouring could be left to her, providing her with artistic license and individuality, such was his high regard for the quality of her work.