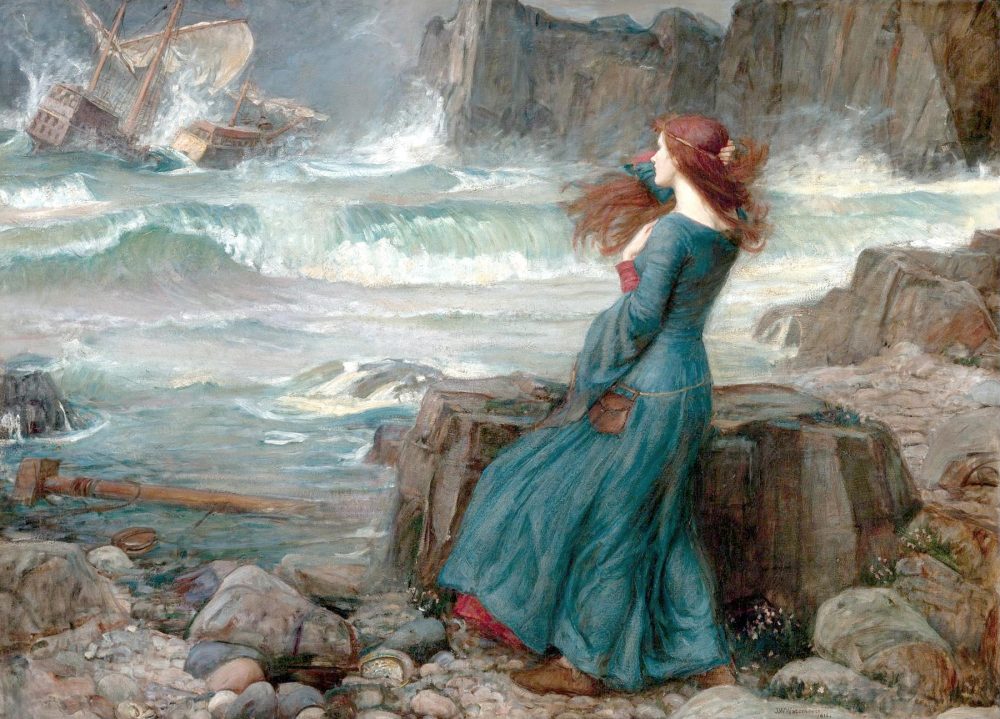 Waterhouse studied at the Royal Academy Schools in the 1870s; the early works he produced were of a classical style and were heavily influenced by artists such as Leighton and Alma-Tadema. He made several trips to Italy where he found inspiration for his paintings and began to produce large canvases using classical compositions and the Pre-Raphaelite concepts of beautiful women who were ultimately tragic or powerful.

He was active several decades after the break-up of the Pre-Raphaelite Brotherhood, which had seen its heyday in the mid-nineteenth century, leading him to be known as "the modern Pre-Raphaelite". Borrowing stylistic influences not only from the earlier Pre-Raphaelites but also from his contemporaries, the Impressionists, his artworks were known for their depictions of women from both ancient Greek mythology and Arthurian legend.

Miranda is the daughter of Prospero, one of the main characters of William Shakespeare's The Tempest. She was banished to the Island along with her father at the age of three, and in the subsequent twelve years has lived with her father and their slave, Caliban, as her only company.  She is openly compassionate and unaware of the evils of the world that surrounds her, learning of her father's fate only as the play begins.

Waterhouse painted versions of Miranda at the start and end of his career, in 1875 and 1916. This later version was exhibited at the Royal Academy in 1916, a year before Waterhouse's death, and shows Miranda as witness to the storm and shipwreck which the play’s actions begin. Scenes from The Tempest were also interpreted by other artists, including Pre-Raphaelite painter John Everett Millais.