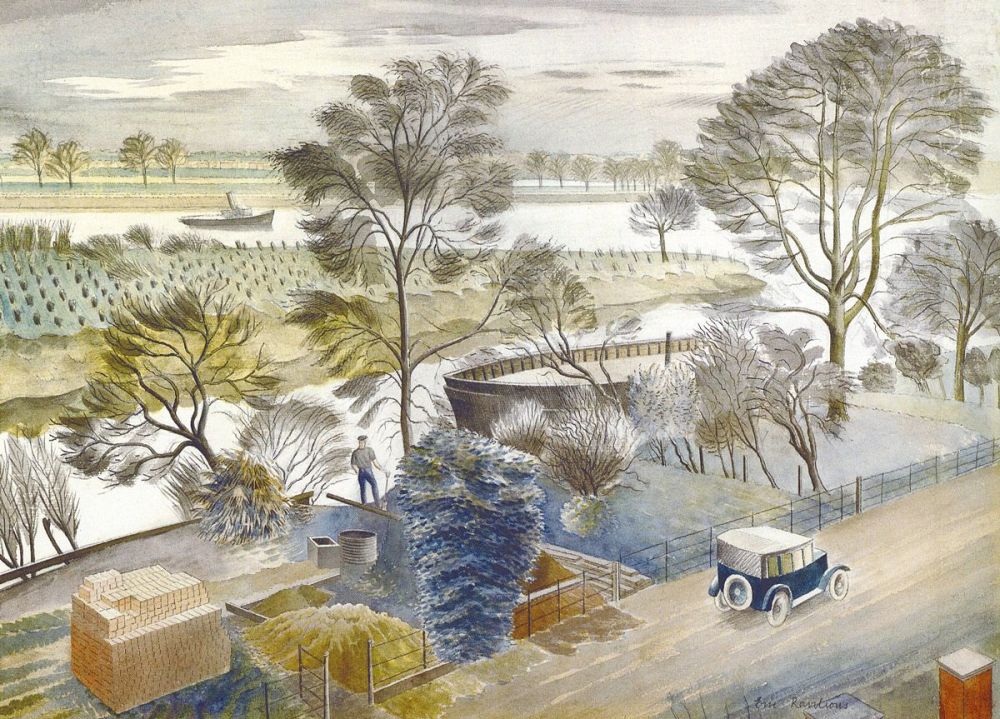 Eric William Ravilious (1903-1942) was an English painter, designer, book illustrator and wood engraver. He grew up in Sussex, and is particularly known for his watercolours of the South Downs. The countryside of Sussex and the Essex were his main subjects. As he disliked both bright sunlight and the colour green he preferred to paint under grey or cloudy skies, and in winter. Ravilious was a brilliant watercolourist, lithographer and designer, but above all was a wood engraver. It was in this medium that he first found artistic expression in the early 1920s, and over the next two decades produced some of the finest engravings of the age. As well as woodcuts, he engraved more than four hundred illustrations and drew over forty lithographic designs for books and publications. Ravilious was appointed as an official war artist in December 1939, and was given the rank of Honorary Captain in the Royal Marines and assigned to the Admiralty. He died, at the age of 39, when the aircraft he was on was lost off Iceland in 1942.

In this painting, followers of the Oxford and Cambridge Boat Race may recognise the scene as the island lies about halfway along the course, just around the Surrey Bend from Hammersmith Bridge looking from Chiswick Mall over the western end of Chiswick Eyot towards the low-lying land of Barnes. In the 1930s Ravilious and his wife divided their time between Essex and a flat in Hammersmith which overlooked the river near this scene, and they held Boat Race parties each spring, enjoying the drama as the boats appeared in sight, jostling for position.