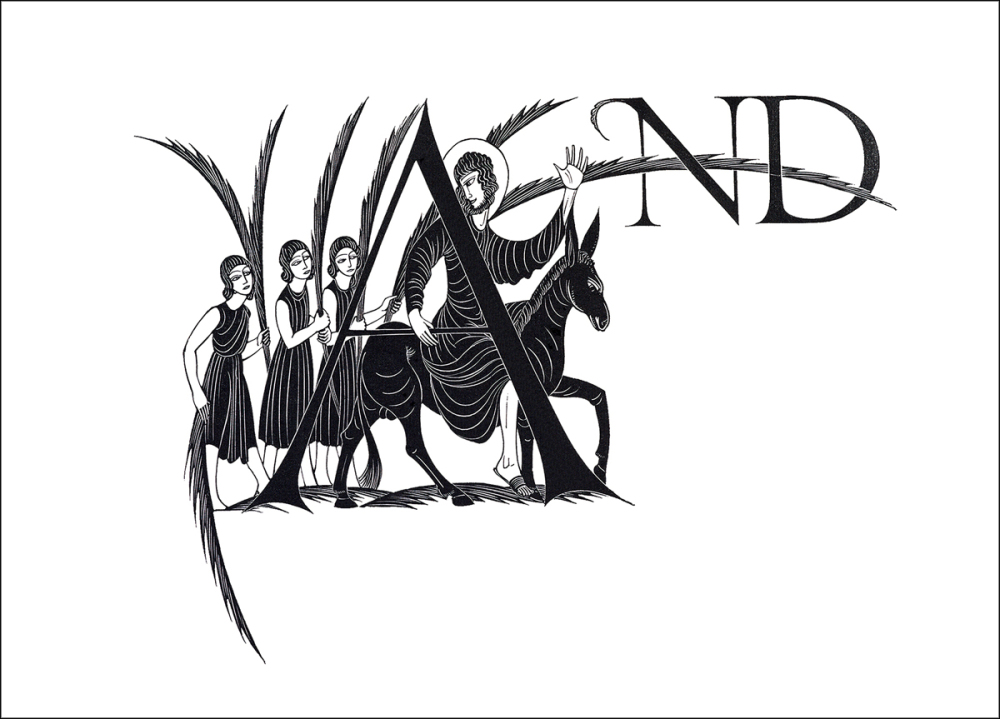 In 1924 he moved to Capel-y-ffin in Wales, where he set up a new workshop, and in 1925 he designed the Perpetua typeface, with the uppercase based upon monumental Roman inscriptions. This was followed by the Gill Sans typeface in 1927-30, based on the sans serif lettering originally designed for the London Underground. He published numerous essays on the relationship between art and religion, and also produced a number of erotic engravings. Gill was one of the most respected artists of the 20th Century. His statue Prospero and Ariel adorns the BBC's Broadcasting House and the Creation of Adam is in the lobby of the Palais des Nations, now the European HQ of the United Nations in Geneva.

The Sunday before Easter, commencing Holy Week and the sixth and last Sunday of Lent is known as Palm Sunday. Palms are blessed and carried in a procession that represents Jesus' triumphant entry into Jerusalem during the last week of his life. The procession dates to the fourth century in Jerusalem. In the Middle Ages, the procession went from church to church. Palm branches, used by people throughout the world as emblems of joy and victory, are also emblems of Christian victory and are often associated with Christian martyrs. Where palms cannot be found, branches of olive, box elder, spruce or other trees are used instead. Sometimes the palms are twisted into different shapes including the shape of the cross. The service on Palm Sunday may include the chanting of the passion story from one of the gospels and for this reason the day is also known as Passion Sunday.