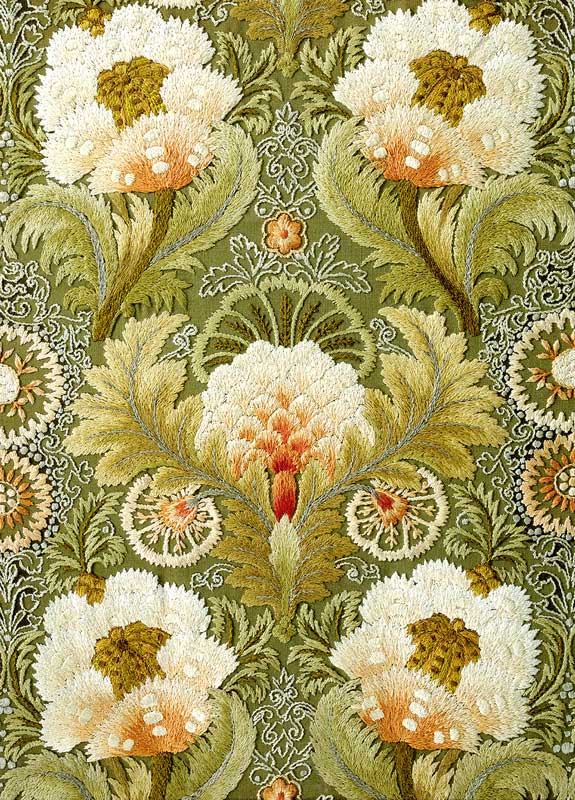 Thomas Wardle inherited the family firm from his father, and became interested in the process of dying. Silk yarns and fabrics, which came from India and China, were dyed in Leek, using dyestuffs from all over the world and were further enriched with gold thread from Japan. William Morris arrived in the town in 1873 to study dyes, he wanted to return to the colours in dyes derived from natural materials, and Thomas invited him to work at his printing works Hencroft, to support a new direction in the use of colour and design.

Morris returned to the town several times in 1875 in the search for natural dyes, and in particular the perfect blue. Wardle collaborated with Morris, thus making Leek's fabrics an essential item for enthusiasts of the Arts & Crafts movement. Large and deceptively simple floral designs, using newly developed dyes, helped to push the boundaries of textile manufacture. Morris was so impressed with the developments he observed in Leek, he stayed in the town two years working on colours and processes that would make his own experiments in tapestry, printing and wallpaper all the more possible.

During his time in Leek, Morris took an interest in the Leek School of Embroidery, established in 1879 by Thomas Wardles's wife, Elizabeth, and were well known for the originality and excellence of their work, Morris possibly offered some of his own designs. It's notable how so many Morris-style church embroidered items are still in use in local churches today. Many architects and designers of the day, including Walter Crane, John Sedding, Norman Shaw and George Gilbert Scott who were designing churches, employed the Leek Embroidery Society to embroider church vestments and altar cloths. The Society’s work was in demand until around 1900 and was sold in Wardle’s London shop, and also William Morris and Liberty.