John William Waterhouse: Tristan and Isolde with the Potion, 1916 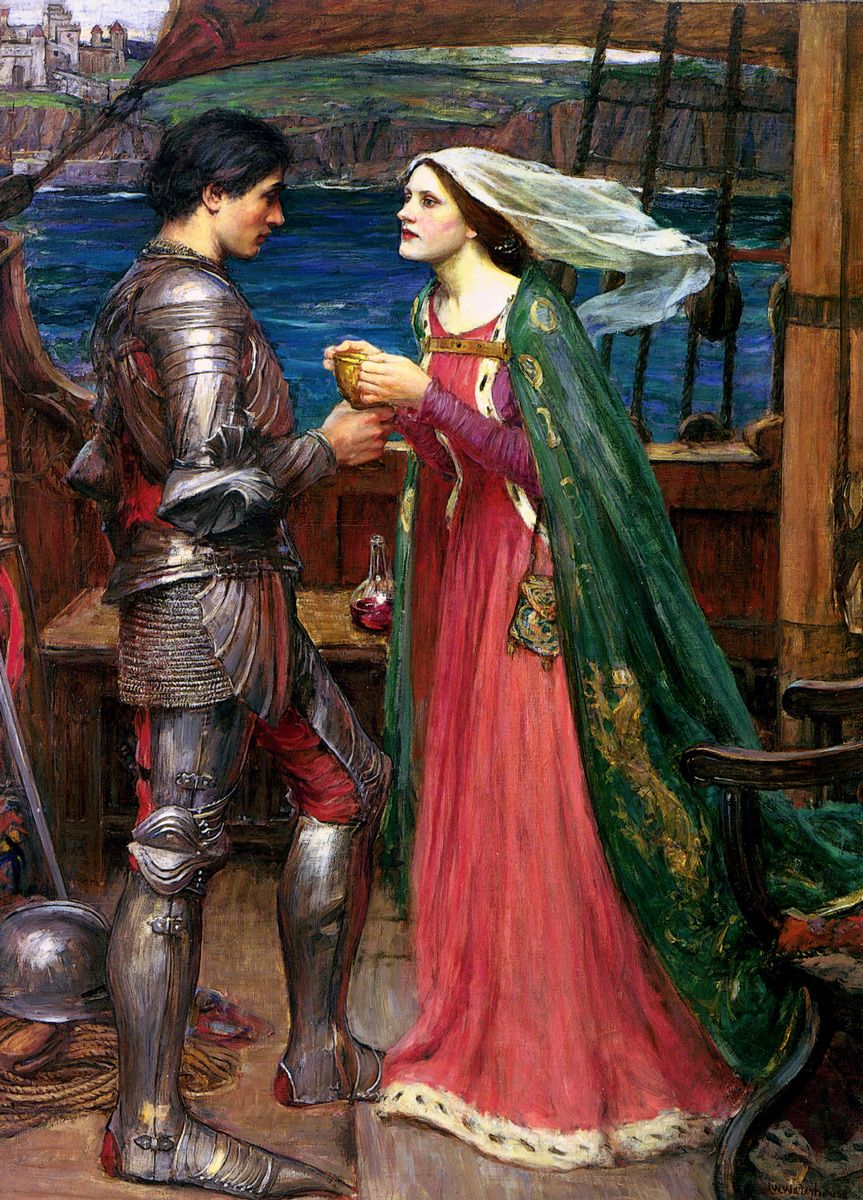 The early works of Waterhouse were of a classical style and were heavily influenced by artists such as Leighton and Alma-Tadema. He made several trips to Italy where he found inspiration for his paintings and began to produce large canvases using classical compositions and the Pre-Raphaelite concepts of beautiful women who were ultimately tragic or powerful. He was active several decades after the break-up of the Pre-Raphaelite Brotherhood, leading him to be known as "the modern Pre-Raphaelite". Borrowing stylistic influences not only from the earlier Pre-Raphaelites but also from his contemporaries, the Impressionists, his artworks were known for their depictions of women from both ancient Greek mythology and Arthurian legend.

Isolde, Princess of Ireland, has been entrusted to the care of Tristan, the nephew of the king of Cornwall, to take her safely to Cornwall to marry the king. However, Tristan loves Isolde himself and Isolde loves him in return. Tristan and Isolde decide to die together rather then be separated and choose to drink a poison. However, unbeknown to them the poison was switched for a love potion. After they both drink it they fall even more madly in love and run off together into the forest. Tristan and Isolde, is a legend depicted in many Victorian paintings.

Waterhouse captures the two lovers together on the boat just before drinking the potion, thinking they are about to die. The desperation in Isolde's face can be clearly seen as she clutches the goblet with both hands. In Tristan we see a distinct look of resignation as he accepts it. Waterhouse also points out the separation that has been forced between them. They stand on either side of the painting with the cup and the bottle of potion between them. On Tristan's side lies his helmet and sword with a rope coiled underneath. In the background the castle can be seen illustrating a tie to his duty in bringing Isolde safely to the king. On Isolde's side sits a throne like chair symbolizing her duty to marry the king once she gets there. Also, there is a very distinct line representing a plank which runs between them, directly under the goblet, further emphasizing their separation. As Tristan accepts the cup his foot "steps over the line", foreshadowing that the separation between them is about to end.